With training camp starting on July 26, and Family Night tonight, Football season is officially upon us here in Green Bay! In honor of the beginning of the 2013 football season, I am posting the instructions on how I made my Packer and my Wood Chop T-shirt.

The T-shirt was in honor of Charles Woodson, my favorite Safety, regardless of who he plays for.  My brother, a friend and I were watching a pre-season game and taking about just how awesome Charles Woodson was. We were tossing some catch phrases to use on a t-shirt, and there were two that we came up with.  Our friend, Scott, came up with Don’t Farles with Charles, and my brother came up with Wood Chop. I know we’re nerds, you can say it!

Taking that idea and running with it, I decided to make some t-shirts, I chose to use Wood Chop because it was shorter and would fit on the shirt better.  I found the shirts and the iron on pages at Hobby Lobby.  The t-shirts were less than $6.00 a shirt. The next step was to find a font that is the closest to the font on the Packer’s jerseys.

I found this at Font Space. The font selected was called “High School USA Sans”.

Items for the skirt:

Take measurement of your waste to get the amount of fabric and the length of elastic band (leave a few extra inches to sew ends of elastic together) you’ll need.  I doubled mine because I wanted my skirt to be full. I was able to get the tulle on sale at Joann Fabrics for 50% off!

Take the elastic and and wrap around your waist pin in place, you don’t want it too tight or it will stretch out and there will be gaps between the tulle.  Step out of the elastic and sew ends together. I used a sewing machine for this part, you can hand stitch if you want.

Now the fun begins!  Fold the tulle in half lengthwise.  Placing the cutting mat under the tulle take the ruler as a guide and use the rotary scissors to cut a strip approximately 2 to 4 inches wide. Continue until all of the tulle is cut in strips. should have strips that are folded in half.

With all of the strips cut, making sure that they strips are still folded in half, take one or two at a time (depending on the fullness you want) bring up behind the elastic, fold the folded end over the elastic and bring the loose ends through.

Continue until all the strips are on. 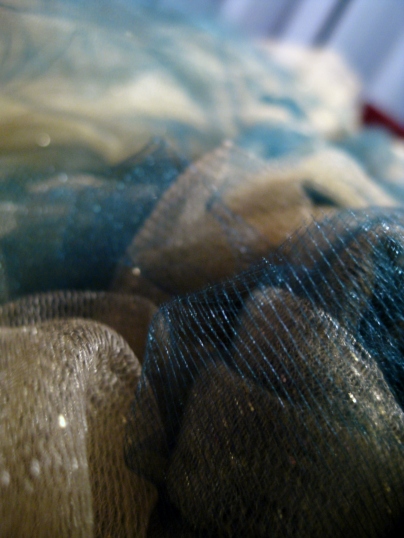 I alternated which color was in front and which one was behind, if you want you can have one color on top and one on the bottom. Some how, I ended up with more yellow pieces than green, so in some places there are two yellow pieces.

I threaten to wear my tutu to more games, just to embarrass my dad.

How do you support your favorite team?