This weekend was pretty packed.  Thursday night I picked up some supplies for a new project.  I need a garden hose hanger.  And while I was at it, I decided to make an address post, since my duplex doesn’t have house numbers that are visible from the road, people tend to drive right past it. I found instructions for both of these over at Shanty 2 Chic.  Thursday night I got all the wood cut and ready for assembly on Friday Night.
Thursday night, I also made a BLT for dinner with a tomato I picked up from the Farmers Market on Wednesday night.  I added a little twist by adding the spread from the Grilled Portobello Mushroom Burgers I made earlier this summer.  Delish! 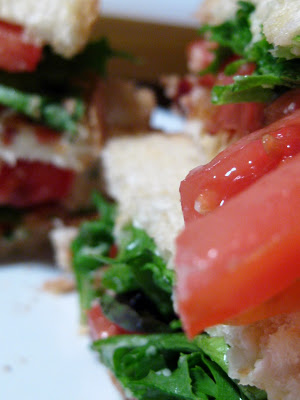 Saturday afternoon, I got busy on making my address post and garden hose hanger. I finished getting the garden hose post together and painted.  I had assembled and spray painted the address post Friday night. I dug a hole for each post, and was able to put up the number post before calling it quits.  I’ll have the step by step up later this week. 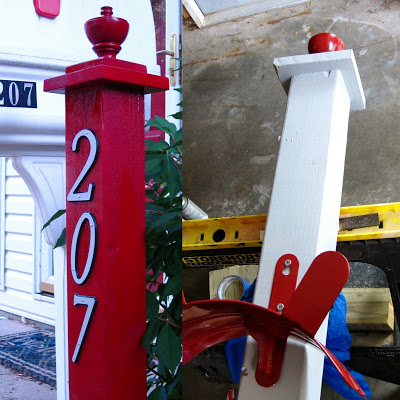 For dinner Saturday night I made a salad with vegetables from my garden and I made roasted fingerling potatoes with garlic, basil, oregano and a little Kosher salt!  I had a quiet night in and watched the White Queen on Starz. 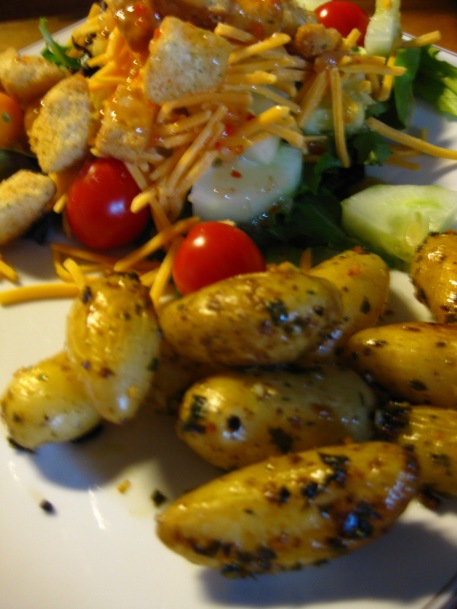 Sunday, I got up early, washed a load of laundry, and met my brother and his friend Nick to go down to the Brewer game at Miller Park.  We ended up getting on the highway at 10:30 and we had to pick up my friend Heather who lives in downtown Milwaukee. We got to Heather’s apartment at 12:00. Which was pretty good time. We got to Miller Park with about 45 minutes to spare, we each had a drink at the car, and grabbed one for the walk to the stadium.

This year is clearly not the Brewer’s season, they are dead last and then there is the whole kerfuffle with Ryan Braun. As a Thank You, in the month of August the Brewers are giving all attendees a $10 voucher good for food, drinks, merchandise, and future tickets.  We were handed our vouchers as soon as we walked in. 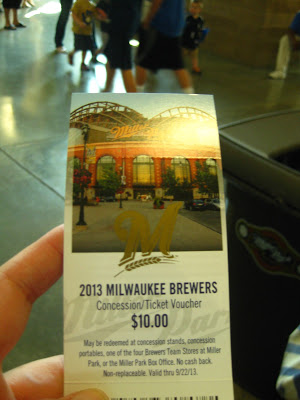 After getting our food, Heather and I stopped to take some pictures with Bernie the Brewer (it was his birthday) and signed a birthday card for him.  We also took some pictures with the Klement’s Racing Sausages.  Well not the actual Racing Sausages and Bernie, but replicas, I even had my picture taken by one of the Brewers employees.  I’m searching to see if it’s up and if it is I’ll post the link.

After a few pictures we settled back into our seats and watched the rest of the game.  We caught the actual Racing Sausages and their mini counter parts in a relay race. I have to say that the sausage race was the high point of the game!  We sang “God Bless America” and the “Beer Barrel Polka” during the 7th Inning Stretch. Random fact: Beer Barrel Polka was a signature of Liberace-who was born in West Allis, WI.

This game, like most of the games this season, was one of those games you go to and just enjoy being at the game, and not putting too much stock in a W or a L. (HA! This is RARELY something you would ever hear me say about a Packer game).  The final of the game was Milwaukee 1 Cincinnati 9.

Once the game was done we headed back to the car, and were able to get out of the parking lot pretty quickly since our lot was pretty empty.  We dropped Heather off and were on our way back to Green Bay.

How was your weekend?  How do you like to tail gate or hang out before a sporting event?