Skip to content
Hey guys!  It feels like autumn is starting to settle in here in Wisconsin.
I have to apologize for my lack of posts.  I’m still trying to find a balance between work/school/blogging and the rest of life! So far classes are going well. Ask me how I’m doing in a few weeks when I’m in the thick of it!
This past Friday, I had a bonfire and had some friends, co-workers and family over.  One of the ladies I work with grew up with my dad. It was nice way to wind down the summer, and have a few beers and just relax.  I picked up some ginormous marshmallows to make S’mores with.
Saturday, we went apple picking.  This year I didn’t purchase a whole lot.  Two years ago, I purchased 70 pounds!  I didn’t realize how much I bought!  I had purchased a new food grinder then (the one I inherited from my mom was older than I am and was leaking like no other).  which was the hand crank kind. I was making apple butter, apple sauce and apple pie filling until the cows came home! That meant I was eating apple butter, apple sauce and apple pie filling until the cows came home! I gave about half of what I made that year to friends and family. Last year, I scaled back and got about half of what I purchased the year before.  I still have some apple sauce that I’m going to turn into fruit leather this weekend with the use of my brother’s food dehydrator.   I ended up buying a Kitchen Aid Stand Mixer last year after I was tomato juice all over the place!
I only picked up enough apples to snack on this year, along with some mini pumpkins to decorate my house with. We were there for an hour, but we did get to ride on the trolley to the apples, and walked back..

After Apple Picking we stopped downtown and checked out a car show. I thought it was going to be a more eclectic car show, but it was a Packer car show, that coincided with the opening of the Packer’s Heritage Trail.  Most of the cars I have seen on game days, but I still think it’s pretty cool that people how people can transform these cars, buses, ambulances into rolling party machines.

Sunday included getting up early to be at Lambeau for my shift which started at 7 and standing in the rain for four hours.  Surprisingly the rain wasn’t bad.  It was just a constant drizzle, that ended up stopping just before game time.  Talk about perfect timing.  My brother gave my dad and I each a ticket to this game.  After I punched out, I went up to my seats. I got to walk past the tunnel where the Packers come out on to the field (top left picture).  The icing on the cake was riding in the cargo elevator with the Packer Alumni.  I didn’t snap a pic because I felt awkward asking them for a picture (and I though their handler kept giving me the stink eye). I did recognize Bart Starr, Willie Davis and Paul Hourning!

The bottom right and left picture were take as the touchdowns happened (insert my Packer dance to Todd Rundgren’s Bang the Drum All Day).
After the game we met up with my dad’s brother and a family friend who was up from Chicago for the game.  We sat around and waited for the lot to empty out before leaving for the long drive of a block and a half!
After we came home to my dad’s, I ordered pizza and we had dinner.  Watched a little bit of the race, and the first quarter of the night game. 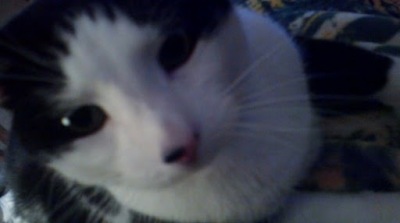 I did get to snuggle with this girl…Boots (AKA Bootsie Collins, Baby Girl). My mom inherited her from my grandma when she passed away, and my dad ended up inheriting her and mom’s cat Tinker (Tinker passed a way a little over a year ago).  Don’t let her cuteness fool you, she is a She-Devil. 😉 But a little snuggle-bug when she wants to be!
A quick up date on my garden.  I have cucumbers coming out of my ears!  My carrots are coming along nicely, they are about 3-4 inches, and my peppers are small.  I don’t think that they are going to make it if ti gets any colder!  I had strawberries that bloomed again late summer so I’m going to keep the plant and see if it will grow next year.

So I decided to have a Halloween party.  It’s official, the party planning committee is a go!  I have the invites set, just have to take them to the Kinko’s to get them printed, and make them and send them out!  I will try to keep you guys on how the party planning is coming!

I love all thing spooky, creepy, and Halloween. I’m watching the series premiere of Sleepy Hallow.  It’s a little out there but it seems pretty good.  It seems to mix Washington Irving’s story, the Book of Revelations and witches, so far.  I’m most excited for American Horror Story that will premiere on October 9th.  I can’t wait!  I keep watching the previews over and over!

Do you guys have any favorite shows to watch for the Halloween season?  Let me know what you think.