Skip to content
I have what seems like to be a lifetime supply of apple sauce. Well maybe 6 months worth. I love apple sauce, I just don’t love it enough to eat it every day.  I thought I would try to make some of it into apple fruit leather.
I borrowed my brother’s food dehydrator for this recipe.  My first attempt was so-so, I didn’t hit it out of the park but it wasn’t a complete failure. Some parts seemed to be done and some seemed that they could have dried out a little while longer. Even though it wasn’t completely done, it tasted wonderfully.  It tasted like fall, or at least what I think fall would take like.
First I grabbed a few pints of apple sauce, and poured it on the fruit roll up sheet that came with the dehydrator. I found that 1 and a half pints covered the sheet up to the lip. I smoothed it out-well I thought I did, and tried to mix the two batches together.  One had more cinnamon and cloves than the other one did.
I turned on the dehydrator to about 140 degrees, and let it start to work it’s magic.  This picture below is about after an hour of dehydrating. 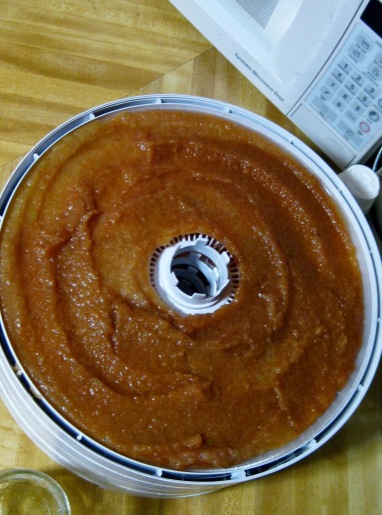 What would have been in the left half of the picture looked done so I cut it off and ate it! I had to try a sample. 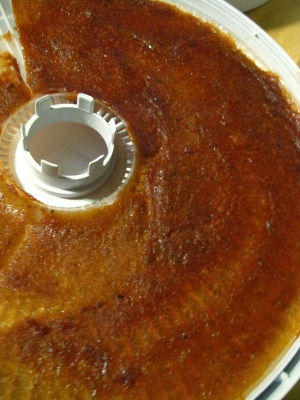 I did have a second layer…but I put that on wax paper and when that layer got done, and by done I really mean over done, I couldn’t peel it off the wax paper.  Note to self don’t use wax paper in the dehydrator!

Next time I try this I will have to make sure that I have more patience and allow the machine to work it’s magic.
Not sure if I like my little label on the picture…we’ll see.
Hope you guys have a good rest of the week.