It’s the beginning of The Most Wonderful Time of the Year!

Friday night I went out to dinner with my brother Greg and his girlfriend Betsey.  I always enjoy spending time with my brother-we don’t get to much during the football season with him working at Lambeau.  It was also nice to spend time with Betsey and get to know her better.   The three of us went to one of my favorite restaurants here, Plae Bistro.  It was a small restaurant, that just recently expanded, which was a nice surprise.

I had the Wild Mushroom Ravioli, and it didn’t disappoint.  It was wonderful. The creamy sauce, and the mushroom, even the peppers (which I didn’t eat-I don’t like onions or peppers) added a wonderful flavor.

Saturday, I had all intentions to clean, do laundry and get my Halloween decorations. You know what they say about the best laid intentions.  I did get a little work done but not a whole lot.  Jenny wanted to show her sister-in-law Darsey and I her new house. So we all road over there, but on the way a little mishap happened.  Darsey took a corner a little too hard and Jenny smacked her tooth and broke it. Talk about a bad weekend for teeth!

Jenny showing us the house was marred by that, but we did get to see it before helping her move in on Sunday.  After a quick tour of the new house, we headed back to Jenny’s old place, and tired calling local dentists to see if ANYONE could get her in to fix her tooth.  Thankfully she was able to get in on an emergency basis.

Sunday, since the Packers had a Bye, I helped Jenny and her boyfriend Pat move.  I thought it was going to be a longer than it was.  By the time I got there, one load was already taken to the new place, so we packed up a trailer that Pat’s friends had brought.  We got most of the stuff moved in one trip.

Monday I brought Halloween decorations to work and put them up!

I was going to make some head stones this weekend to put in my yard, but my dad reminded me that my mom had made some, and he offered them to me because he doesn’t decorate for the holidays the way my mom did.  So I’m going to stop over there and pick them up.  That saves me time and money! I had partial luck. I found one of my mom’s old headstones. I did find some old political signs and left over plastic that she used to make the headstones.

A few weeks ago I picked up some plastic skulls from the dollar store.  I picked up some Krylon Glitter Blast spray paint, in Starry Night, and painted them.  I ended up having to do two coats of the glitter, the one coat didn’t completely cover the skulls. 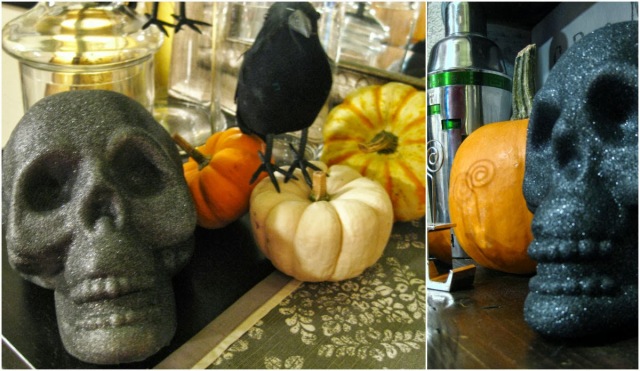 I can’t wait to get my outside decorations up! That will be my project for next Saturday morning, and possibly go take some pictures with all of the wonderful fall colors!

Do you guys decorate for Halloween? Is there someone in your neighborhood/city/town who does a spectacular job decorating?