My brother had some people over for the Packer game.  I made buffalo chicken dip, and cake pops.  For my cake pops, I followed the directions I found over at Bakerella.  The only difference I made was to use gluten free cake mixes.  I made two flavors, one was a pumpkin and the other was cherry chocolate amaretto.

I’ve tried using Wilton Candy Melts previously by using a double boiler method and microwave method. Both of those didn’t have the best results.  I had done some research and read that an alternative was almond bark, and that it read that a slow cooker worked to melt and maintain the temperature.  I started out by chopping up my brick of almond brick and and 2 tablespoons of Crisco and put it my small crock pot, stirring until melted.  Once Melted, I added food coloring to make yellow coating. Make sure to continually stir, otherwise you’ll be left with a burnt blob! 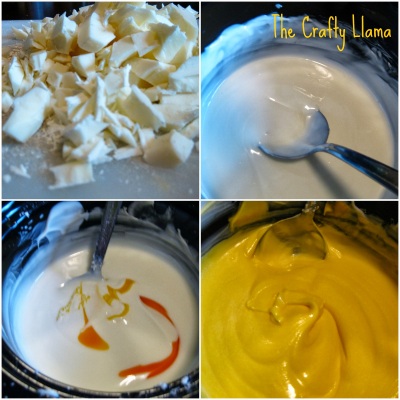 Next, I took a ball and put a stick in the end, then I took the stick and dipped it into the melted almond bark, and stuck it back into the hole I previously made.  I did that for each of the balls, the coating would act like a glue holding the ball on the stick.  Now they are officially Cake Pops!  Then I took each cake pop and dipped it in the melted almond bark.  I found that swirling them around coated the cake pops the best.

I made sure to gently tap the excess coating off.  Then I let each pop settle and coating get hard.  Once the coating was hard, I got out the green and white frosting.  I first started by putting green frosting in a circle on each side.  Then I used white to pipe the “G”.

The finishing touch was putting the green/white/green center stripe down the center, to mimic the helmet.  With that, I was done!

I have noticed that when I bake w/gluten free, my cakes, cupcakes seem to be very dense and heavy. Do you have any suggestions to make my deserts lighter?  Feel free to comment below!