Hello out there.  I hope you guys all had a great weekend.

I am so happy that my midterm exams are done and in the bag.  Now I’m waiting for my grades to be posted.  I ended up getting 92.5% on my employment law midterm and 100% on my civil lit 2 mid term! I’m not gonna lie I was shocked I did that well on my civil lit midterm!

This weekend my only plans were to get some pumpkins and carve them.  I did just that.  I took a drive up to Abrams, WI to BerryLand farms, which is about a 20-30 minute drive north of Green Bay.  They have a pumpkin patch and haunted hay ride at the Farmhouse Ice Cream Parlor-which used to be the Farmhouse Restaurant and Ice Cream Parlor that I had frequented a few times with my mom and grandma when I was younger.

When I got to BerryLand Farms, it started raining.  It wasn’t a heavy rain, but it was enough to get me wet and it was COLD.  The rain made me pick out my pumpkins quickly, I picked up  five pumpkins and I only paid $13.00, which I thought was a pretty good price. I found some pretty good size pumpkins. Please don’t pay attention to my messy trunk! 🙂

On my way home I took a detour and stopped at Barkhausen Waterfowl Preserve.  I remember going here on field trips for school.  This place has changed quite a bit.  I have a distinct memory of lots of mosquitoes! There are some local legends that this was used as a gangster hideout during Prohibition. I’m not sure if it’s true or not, but it’s plausible since the North Woods were used as hide outs for Dillimger, Baby Face Nelson and Al Capone.  Mayor Daley of Chicago had a mansion in Eagle River which, is now owned by a private family and you can see it in Damien: Omen II.  I stayed at the mansion when I was younger, because one of my dad’s brothers was dating one of the daughters of the owners of the mansion. Apparently Al Capone had a mansion across the river so he could keep tabs on Mayor Daley. (I know I have pictures some where and when I find them I’ll post them.) 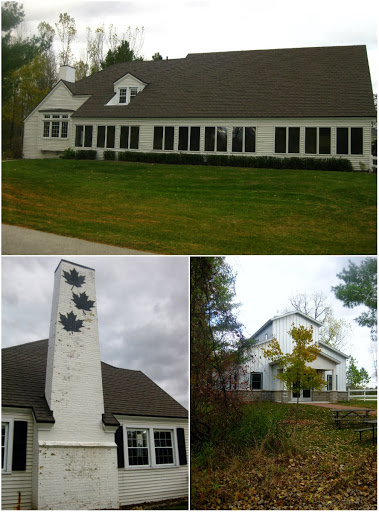 Back to my weekend.  I went walking on the trails at Barkhausen.  On my walk, I saw something out of the corner of my eye cross the trail and upon closer inspection, I saw two turkeys.  I tried to creep up on them as quietly as I could! I did get a few pictures of them, although hidden by trees.

I even saw a little beaver working on building his dam.

After my walk out at Barkhausen, I stopped at the cemetery and visited my grandparent’s grave and my great grandparents grave.

Saturday night I ended up going to a Halloween party with my friend Kira.  We went to one of her coworker’s house.  Since it was last minute and I didn’t have a costume (since I decided not to have my own party due to the crown I needed earlier this month), I ended up going as Pam Beesly from The Office.  All I needed was a neutral cardigan.  The rest of the costume, I already had!

Sunday, after sleeping in longer than I had planned on.  I got to carving pumpkins!  I did a Jack Skellington and Marquette Golden Eagle.  The Jack pumpkin was more difficult than the MU pumpkin!  It must have been all of those little teeth!  Part of the M and the U ended up betting cut thin and broke so I had to prop them up with tooth picks! This was also my first attempt to do a more intricate pumpkin and I thought it turned out pretty well.

What do you guys do to get ready for Halloween?  Share your comments below I’d love to hear them.