So I finally carved some pumpkins.  I can honestly say that the last time I carved a pumpkin was when I was still in high school…which is a long time ago!  I did a little internet search and I found a Jack Skellington and a Marquette pattern that I liked.  I printed them off and taped them to each pumpkin.

I grabbed my biggest knife, the kind that would make Michael Meyers proud and went all Norman Bates on the top off each pumpkin and then I scooped out the insides with my ice cream scoop.

I traced Jack on to the pumpkin and began to cut his eyes out.  The nose was a little tight, but I got out my X-acto knife and my strawberry husker to scoop out the hole.  The biggest trouble I had was from cutting the teeth. I go closer to the corners of the mouth, my area to maneuver decreased. 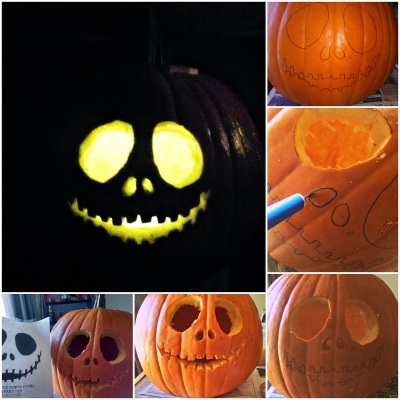 With the Marquette pumpkin, the process was slightly different I actually cut into the pumpkin with my X-acto knife while I had the pattern still on it. I also had to mark what I was just scraping into the pumpkin, what was staying and what was to be cut out.

My pumpkins were on my front porch ready to greet all of the ghouls and goblins today! I had purchased battery operated candles from Biglots, 9 for $6.00, instead of using real candles.  And I can leave them on until the batteries die. Hopefully the non carved pumpkins will last further into the fall season.  I think they look nice sitting outside my front door. 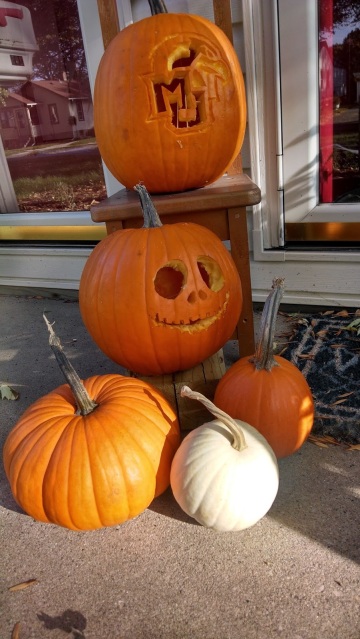 What do you think? Did you carve any pumpkins for Halloween this year? I’d love to see your creations!