This weekend was a little bitter sweet for me. Sunday would have been my mom’s 57th birthday, but I did get to spend a little time with two of my mom’s sisters. Friday night, I had dinner with two of my mom’s sisters and their husbands, and my dad and his lady friend as he likes to call her.   I don’t spend too much time with my mom’s family, mostly because most of them are spread out across the country.  My mom’s sister Debbie and her hubsand Kurt live in North Carolina (they had come up to visit this weekend) my mom’s brother Billy and his wife and boys live in Illinois. Another of my mom’s sisters, Ellen and her husband just moved to the Las Vegas area.  My mom also has two sisters, Jenny and Bonnie, that live here in the Green Bay area.  It’s nice when I get to see them, especially my Aunt Debbie, she reminds me so much of my mom.

My mom was a very crafty lady, she loved making stuff as gifts. But never got into craft fairs or anything like that (no matter how many times we told her it would be a good idea! I think I get my craftyness from her.

I got up early and made the 2 hour drive down Milwaukee and spent the day with my friend and college roommate from sophomore and junior years, Heather, and the son of our roommate Meghan.  When I got into Milwaukee I drove past my old office building. I worked in the building on the left on the 12th floor. 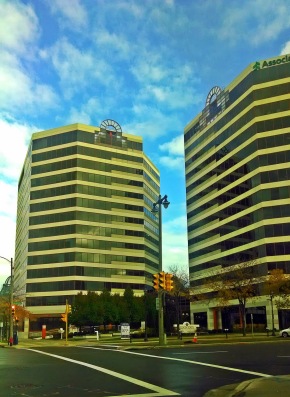 It was Luker and Auntie Heather day.  I met Heather and Luke near Heather’s apartment and we walked to the Milwaukee Art Museum.   It was a nice walk of about 5-6 blocks.  Milwaukee at 10:00 a.m. on a Saturday is still pretty quiet.

It looks like something caught Luke’s and Heather’s attention! I wonder what it was. 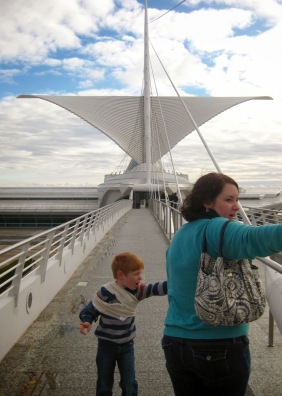 .
We got to the Museum a little before 10am, which gave us some time to wonder around before we had to meet for Story Time.  We stopped in the Thomas Sully exhibit.  We didn’t get to stay to long and look at these beautiful works of art.

At 10:30 we went to Story Time in the Galleries.  Each Saturday, a story is read that relates to one of the works of art. This week the story was A Blue Butterfly: A Story of Claude Monet by Bijou Le Tord. Which was read in front of Monet’s Waterloo Bridge, Sunlight Effect. 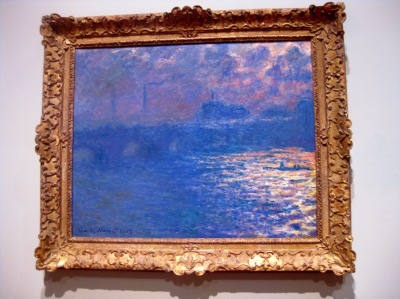 When the story was finished it was time to create our own masterpiece. Luke’s was very abstract, and the combined piece had more of an impressionist feeling to it.

We took Luke to “work at the art museum” and then to create his own pizza with plaster, and came back to paint it after Lunch. 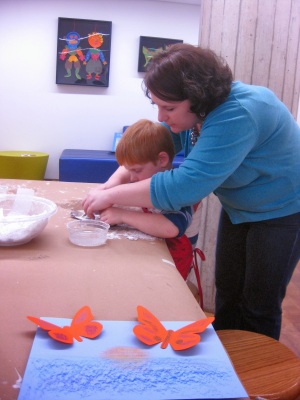 We went and had lunch at the Café Calatrava, in the museum.  I had a turkey sandwich with stuffing and cranberry sauce.  It tasted like Thanksgiving had came early.  The poor kid broke his collar bone a few weeks ago but that didn’t stop him from having fun. I’m amazed at the resiliency of kids! 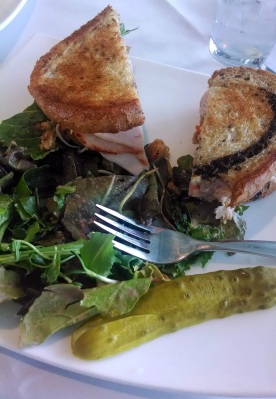 After lunch we went back to paint the plaster pizza and then dressed Luke up in a King for the Day Costume and hunted down the painting . I didn’t even know that the museum offered these kinds of things for kids.  I think this is such a cool way to get kids involved in art. 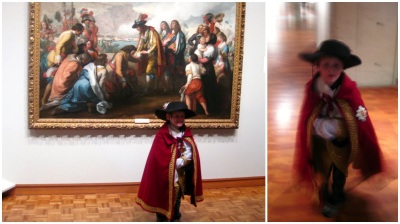 “No Paparazzi” by this time Luke didn’t want anything to do with the paparazzi-which was apparently me!  Auntie Heather taught him about the paparazzi! Seriously too cute!

This is the same picture from three different angles.

After the museum, we went to the Milwaukee Public Market (I have a dream that Green Bay would get one of these).  This is the place to be, there were people grabbing a drink at Thief Wine Bar & Shop some looked like they were on a date or stopping for a drink between a wedding ceremony and reception. There’s a place to eat what you purchased, I picked up some truffles from Kehr’s Candies and some cheese from West Allis Cheese and Sausage Shop. 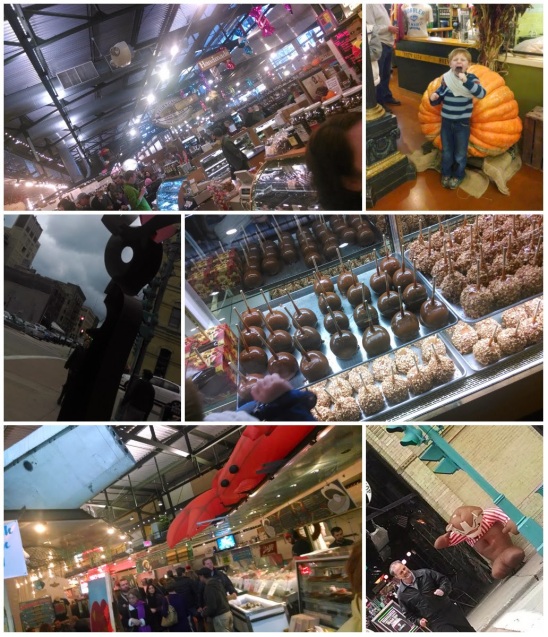 We’ve got green and gold football shaped cheese, Harley Davidson shaped cheese.  And it wouldn’t be Wisconsin with out cheeses shaped like beer, cows or Wisconsin. 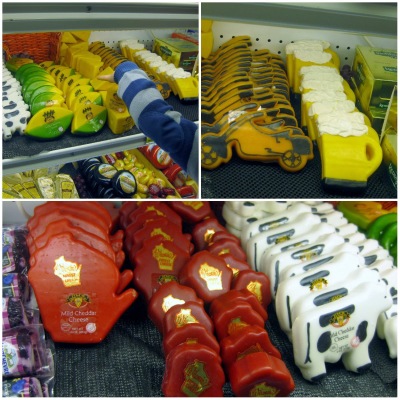 We dropped Luke off around four, and stopped to visit Meghan (my other roommate from sophomore year). She was getting up to work a 12 hour shift at a local hospital, and she looked like she was about to pop! She’s due with baby number three…and this one is going to be a girl! We were all hoping that baby girl would arrived on my birthday but alas, she wasn’t ready to meet everyone!

After visiting with Meghan and her husband Eric, for a bit before going to dinner.  We decided on getting grilled cheeses from Melthouse Bistro, which is near North Ave.  I got  the Baconmato and apples and it was delicious. 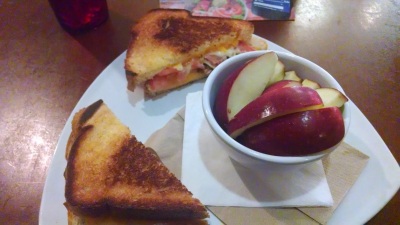 After dinner I headed back home.  I made it home by about nine and went to bed almost right away and took full advantage of the extra hour of sleep.

Sunday morning I spent working on my Mock Trial group project…which will pretty much be my life for the next two and a half weeks.

Tuesday night I received a text from my dad with this picture below.  My dad goes to one of the weekly Packer shows (it’s at a bar a block from his house) and this week Tim Masthay must have been the guest. The picture was of my dad and Tim Masthay-and what .  I call Tim my dad’s “man crush” just to make my dad crazy.  My dad had met him a few years ago on Family night.  Tim pulls into my dad’s lot and says something to the extent of “I need to go warm up I have my Packer stuff on”.  My dad being the man he is looks at him, looks at his clothes and says “Anyone can buy that at Kmart.  I’ll let you in this time but don’t make it a habbit.” You can’t pull the wool over this guys eyes! About 45 minutes later, my dad sees the same guy walking up from the area of the loading dock.  This time he’s in the Packers sideline gear. Lo and behold he comes to apolgize for being a jerk (which I highly doubt he was) and my dad now believing story, also apologizes. That is the story of how Tim Masthay became my dad’s man crush. My dad asked Tim if he remembered the incident and he said he did.  By the way how ADORABLE is his little girl blowing kisses?

Speaking of run ins. Monday night, as I was walking in to the loading dock at Lambeau to punch out after, and as I saw Ray Lewis walking out to the ESPN bus.  He is good looking, and dapper and tall in person.

How was your weekend and the first part of your week? Share your comments below.