This week I’m not going to do a Weekend Recap.  Instead I’m dedicating this post to Dr. Nicholas Contorno.

It is with a heavy heart that I write this post tonight. My band director from college passed away. Some of you may know that I have been playing the saxophone since I was in 5th grade. I started on the Alto, tried the Tenor and found my love of the Bari in high school. When I got to college at Marquette, I joined the band as a non-credit class. That is where I had the pleasure to Dr. Nicholas Contorno.

Dr. Contorno made the Varsity Theater a place of belonging, where everyone who loved music was welcome. Dr. C or Doc.—as us “Bandos” lovingly call him-was such a kind, warm and caring person. He always had a minute to talk to anyone. He always had great stories to tell, and no matter how many times he told them, he would tell them with the same delight It was through Dr. C and the Marquette Band that I was able to meet some of my dearest friends and was able to experience things that I wouldn’t have been able to otherwise.

When I was in the process of applying to law schools, I asked him if he could write a letter of recommendation. I was nervous to ask him.  In typical Dr. C fashion, his response was “Sure. Let’s set up a time and you can come in and we’ll write it together.” This isn’t something I was accustomed to. Normally you ask someone to write a letter of recommendation; they write it and give it to you in a sealed envelope to include with the application. It floored me that he wanted to take time out of his schedule, and write this letter WITH me. So before band I lugged my bag of books in to Dr. C’s office and sat down and got to work taking notes as he dictated the letter. It was refreshing to have him take the time with me and allowed me to chat with him one on one. When we were done, we sat and chatted for a while. He asked me what I wanted to do and I told him that at that time I wanted to work with women and children victims, and advocate on their behalf through the legal system. When we were done he said to me; “Now Lonie when you graduate law school, I want you to come back and see me and I’ll give you one of the old bari’s.” I’m not going to lie, I about fell out of my chair when he said that.  Unfortunately, I was never able to take Dr. C up on that offer; law school was not in the cards at that time.  I doubt I would have ever had the courage to take him up on his offer if I had graduated from law school.  But what resonated with me was the fact that he had that much faith in me—the kind of faith that is reserved for parents to have in their children.  I know that I was not the only student who he bestowed that type of faith in.  Dr. C had a way of making every student (and possibly every person he spoke with) feel special.

My all-time favorite memory—and maybe I should say memories—because there was always a point in rehearsals where everything finally came together.  After weeks of practicing each piece, you could tell when Dr. C thought we had moved from being a bunch of individuals and even a bunch of sections, to an Ensemble.  When that happened, Dr. C would start out conducting us and eventually stop put his hands on his stomach, and nod his head along to the music.  You could tell he was listening for the fine tuning at that point, and enjoying where the music took him.  I always thought he looked like Yoda when he was doing it.  Just thinking about Dr. C like that makes me smile.

Besides being a great person, Dr. C was also excellent musician.  I remember every year he would invite us Bandos to the Italian Community Center for the Policeman’s Ball at the Italian Community Center in Milwaukee.  It was an evening where we could get gussied up, mingle with the officers in Milwaukee, enjoy some great music provided by the Nicholas Contorno Band and play a little Bocce Ball in our finery.  It was because of him that I found my love of big band and swing music. 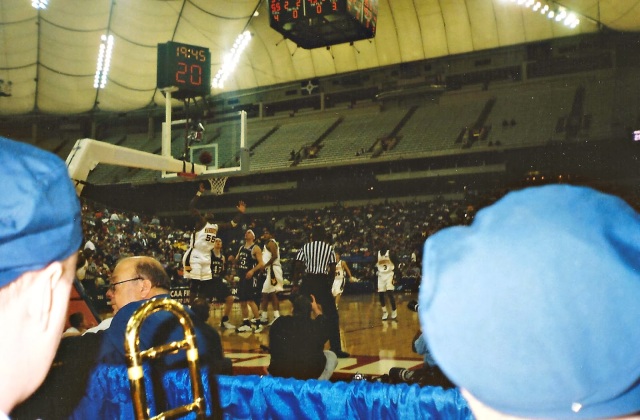 Dr. C at the RCA dome in 2003 in Indianapolis while the Marquette Men’s team plays. Robert Jackson (my favorite) is under the basket wearing #55 and off to the right wearing #3 is Dwyane Wade. 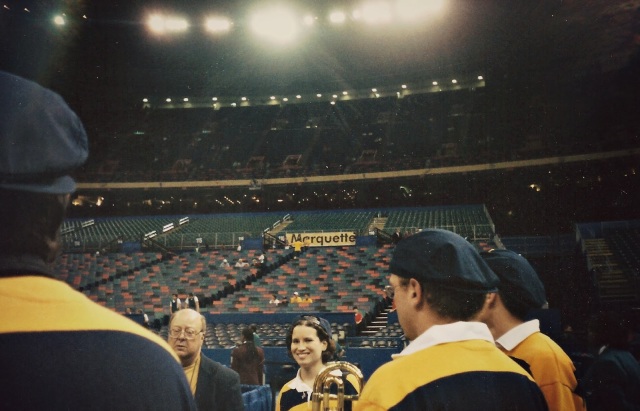 Dr. C chatting with some fellow Bandos.  I think this may be in the Super Dome for the Final Four.

The Varsity Theater was home for 4 years. I was able to meet some amazing people and had some great experiences during my time at Marquette.  For that I have to thank Dr. Contorno.