The past three weekends I’ve made the to Milwaukee each weekend for various reasons.  Last weekend I was there for the whole weekend, and it was a busy weekend. So busy in fact that I got a little sick (maybe it was due to walking in the cold weather) and am writing this as I convalescing.  I went down to my old stomping grounds of Milwaukee.  Friday afternoon, after work, I braved the hellish winds that were whipping across eastern Wisconsin.  I don’t think that I have ever experienced wind like that.  I’m happy that I left early enough to make it there by 5:45.  This trip has also prompted me to seriously start looking in to purchasing new cars.  Not that a new car would have made a whole world of difference, but my car is 11 years old and things are starting to break. Right now the question is fix it or get a new one.  But that’s not the point of my post today!

When I got into Milwaukee, I went to Heather’s place and we had a quick dinner of pasta, and headed out to Lakefront Brewery.  We were a tad late…about 5 to 10 minutes.  And our wonderful tour guide made Heather and I introduce ourselves. I’ve been on the tour about 10 times.  And I think we’ve calculated that Heather’s been on it more than 30 times!  For the low price of $7.00 you get an awesome tour guide, you get four six-ounce pulls of beer (which is good stuff) and you get to see the bottler from Lavern & Shirley.

After the tour, Heather and I enjoyed our beer. Then we headed over to the Milwaukee Art Museum for MAM After Dark. I’ve never been there but I have to say it’s pretty cool. There was a band, Calamity Janes and the Fratney Street Band, and crafts for adults along with artwork from local Milwaukeeans. Heather and I partook in some DIY craft making at the DIY studio.  We did a stamping and embroidery project.  I’m giving mine to my brother as a moving gift.

The MAM looks like a disco!  And that’s Raphael, protecting the MAM.  And finally Heather is in deep concentration embroidering her masterpiece.

After the MAM, we stopped at a bar on the corner of Heather’s street (she lives about 3 blocks away from MAM ) called Buckley’s Restaurant and Bar for a glass of wine before we finished the walk to her apartment.  I am thankful I don’t live in a 4th floor walk up. That’s all I’m saying.  Congrats to Heather.  She passed the FSOT exam on to the second step!

Saturday, Heather and I met Meghan and her boys, Luke and Max, at the MAM.  We had all intentions to be there for story time, but the Meghan’s baby, Sylvia, was on her own schedule and it took mamma a little longer to get her fed.

There were some cool exhibits from area students. They had made dresses out of uncommon items.  One was made out of chains, one made out of drafting papers-you can actually see the drawings, the third was made out of Q-Tips, the fourth was a lamp, and the last one I’m not sure what it was made of but it reminded me of a jelly fish.  These dresses were unique.

We took the boys to the Kohl’s Art Generation studio where the they painted. Mommy and I also painted our own masterpieces.  We needed the practice for our painting and wine at Arte Wine and Painting later in the afternoon.

Meghan had to get home to feed baby, Heather and I went to grab lunch.  We were going to go to Panera, but ended up stopping at Whole Foods and grabbed some stuff to go. Then off to pick up Meghan and make our way to Arte Wine and Painting. By the time we got to painting, we were about 20 minutes late. Being late would continue later on too.

I haven’t painted since middle school art class.  I was pleasantly surprised with the outcome of my painting. Patty and Heather had taken a few classes. One thing they want to do when we are in France is have an Ex-Pat day and sit on the left bank and paint/or draw. 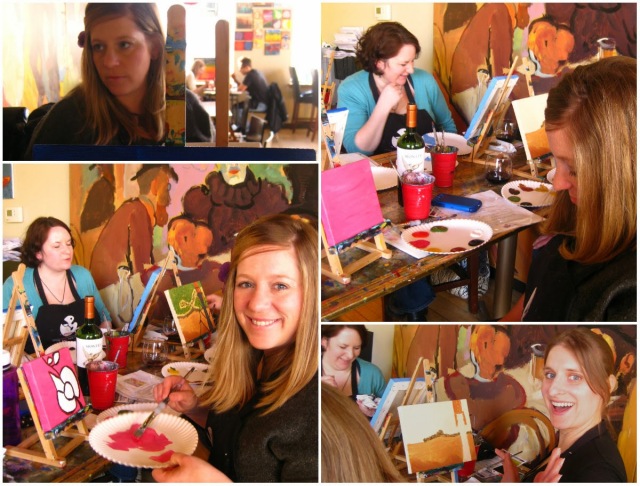 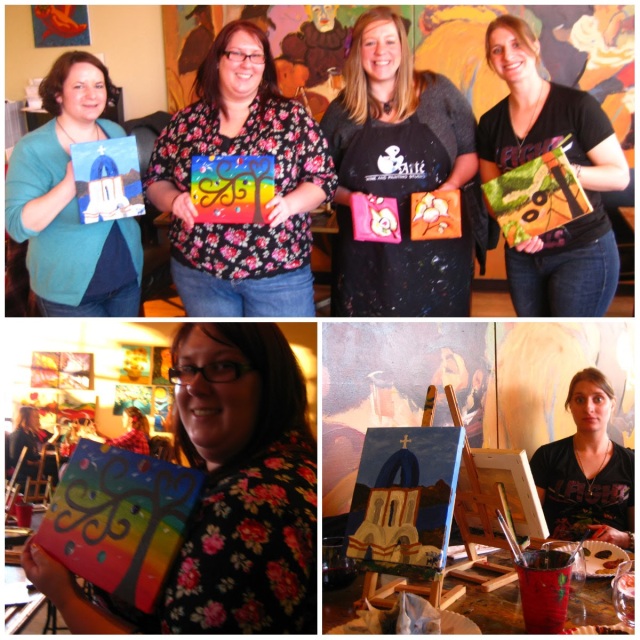 Heather and Patty painted from pictures they had.  Their’s looked pretty awesome not gonna lie.  Meghan, like me also hadn’t painted since middle school, but hers were awesome too.  It was nice relaxing with the girls and doing something creative.

After our painting adventure, Heather and I dropped off Meghan and went to pick up dinner.  We picked up some lemon chicken which took us forever, and caused us to be another 20 minutes late.  Then we picked up some Middle Eastern and Patty had gone to pick up Indian.  Then we headed back to Patty’s place.  We had a date with our friend Phil, who is stationed in Japan, to discuss plans for our upcoming European Vacation.   We discussed what we needed to do, and then had dinner to the lovely 90210 soundtrack.

The smorgasbord: I’m pretty impressed that I tried new food and enjoyed it-I’m a pretty finicky eater, this is all in preparation for my trip this fall.  I tried lamb curry and chicken shawarma, and had some naan and flafel.  All were delicious!

After dinner was done and we chatted for a bit, Heather and I headed back to downtown where we met Meghan and her husband Eric in time for some hookah at the Middle Eastern Restaurant we ordered our shawarma from-they had a date night.  I don’t smoke normally, but since this was a weekend of firsts for me (painting, trying new foods) I thought what the heck. It’s not something I will be doing often. 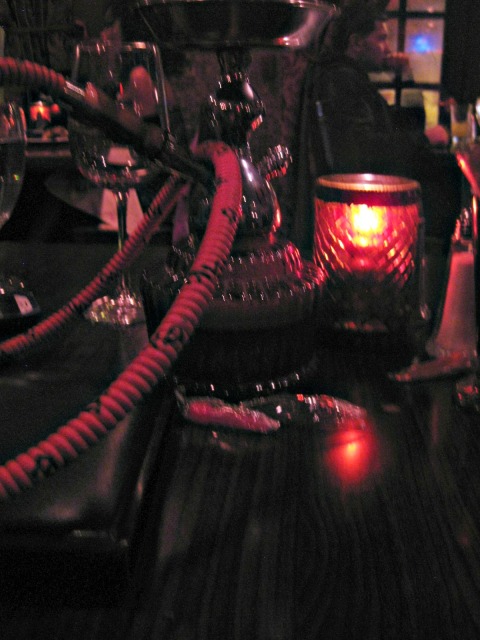 The four of us walked from Casablanca to the Hamilton (in the freezing cold), which wouldn’t have been too bad if was warmer. We stopped in for a drink.  They were swanky and pricey.  So we were good with one. We each tot a different one and passed them around.  I’m not sure what was in mine.  There was some sort of apple liquor in there some where. 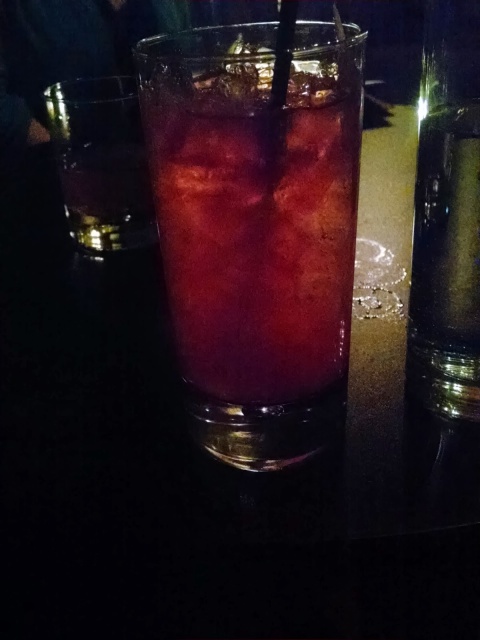 Once we finished our drinks, we headed to Wolski’s Tavern.  IN college Meghan and Heather lived across the street so it was a frequent haunt of ours (more often theirs than mine). Heather struck a pose, and we shot some darts and met up with Brian.

Sunday morning Heather and I met up with Greg at Trocadero Gastrobar for brunch. We each had a Bloody Mary and I had the BELT, which was a bacon, egg, lettuce and tomato sandwich.  It was delicious. We arrived just in time and beat the after church crowd.

After brunch, I headed back to Green Bay.  My dad and uncle had their annual Daytona 500 party which I stopped at for a while. Since the race got rain delayed and the party wound down by about 5:00, I ended up getting home a little after that.

When I got home, I put up my art on my new sofa table.  My goal for the table is to cut it down, and trim the legs down.  It’s a little too long and about 3 inches to tall.  But it does the job for now. 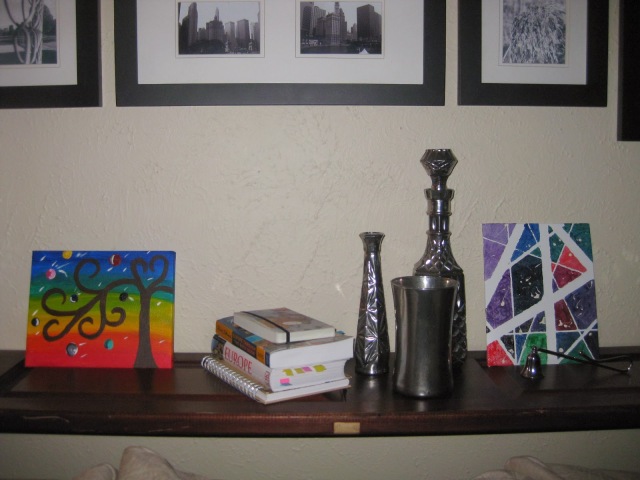 Yesterday, My dad and I drove down to Milwaukee because my brother and his girlfriend are moving to Boston.  Betsy, is moving next week and Greg will be following in the upcoming months. I’m a little sad that the move is taking them so far away, but the opportunity is good for them.

For now I’m need a break from traveling!