My brother scored on the deal, and got 5 bottles of Guinness when I was done.  When I went shopping for the ingredients, it took me a good 15 minutes to see if my local grocery store had individual pints of Guinness for sale.  They only had 40s of Guinness that were sold individually.  Then I had to decide if it was better to get a 40, and drink the rest myself, or to get a 6 pack and give the rest to my Greg.  I don’t drink Guinness too often, so I knew that the 40 would go to waste so I got the 6 pack. Lucky Greg.

Directions:
Cupcakes
Preheat oven to 350 degrees F (175 degrees C), and line 24 muffin cups with paper liners.
Bring Irish stout beer and 1 cup butter to a boil in a saucepan and set aside until butter has melted, stirring occasionally. Mix in cocoa powder until smooth.

Whisk together flour, sugar, baking soda, and salt in a bowl until thoroughly combined.
Beat eggs with sour cream in a large bowl with an electric mixer on low until well combined. Slowly beat in the beer mixture, then the flour mixture; beat until the batter is smooth.
Divide batter between the prepared cupcake cups, filling each cup about 2/3 full.  Don’t overfill. I overfilled a little bit and ended up with some muffin tops. See some of them got pretty big.

Bake in the preheated oven until a toothpick inserted into the center of a cupcake comes out clean, about 17 minutes.
Set cupcakes aside so they can cool.
Ganache

Pour the cream into a small saucepan and bring to simmer.  While the cream is heating up, place the finely chopped chocolate in a heatproof bowl.  Once cream is hot, pour over chocolate, and let sit for about a minute.  Then whisk until smooth.  If the chocolate doesn’t completely melted, put it over a double boiler or microwave in intervals of 15-20 seconds.  Finally add the butter and the Irish cream and stir to combine. 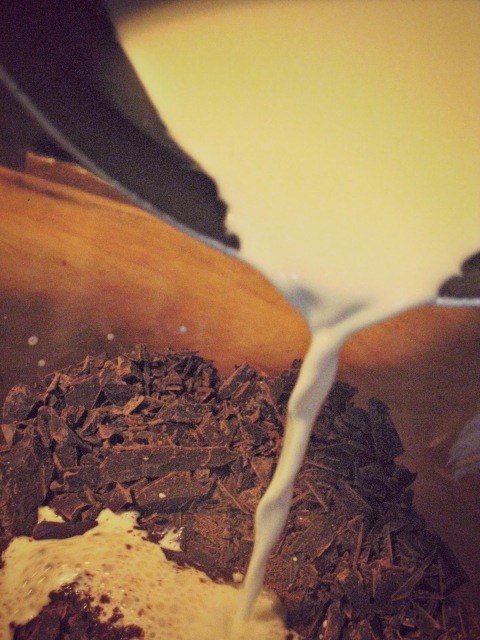 Allow ganache to cool until thick enough for piping.  If in a time crunch (not to be confused for a Time Warp) place the ganache in the refrigerator stirring every 10 minutes so the ganache cools evenly. While waiting for the ganache is cooling, and after the cupcakes have cooled, cut cores out of the center of each cupcake with a sharp paring knife. Discard cores-or snack on a few. Once the ganache has cooled and thickened slightly, place in a piping bag with a wide tip and fill each cupcake.

I frosted my cupcakes using a Wilton 2D frosting tip. My frosting technique was pretty lacking. I found this really easy to follow frosting tutorial over at The Tomkat Studio. 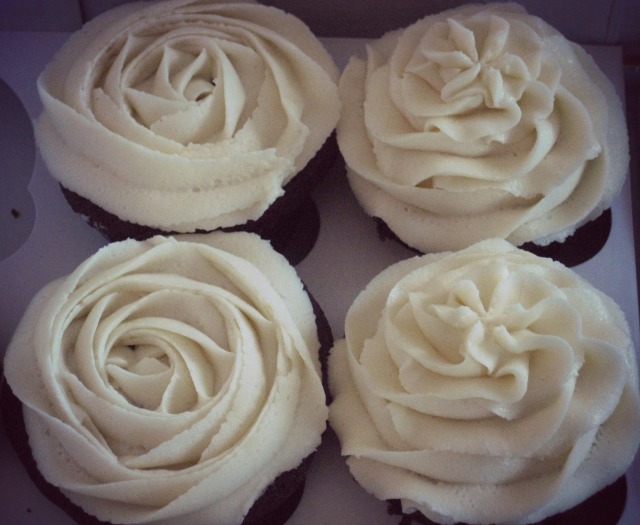 When done garnish how you choose.  I sprinkled mine with some green colored sugar, festive.

I ended up with about a third of the frosting left so this week…maybe for my brother’s “Shipping up to Boston” going away party I’m going to make some.