I hope everyone had a safe and enjoyable Memorial Day weekend. (sorry this was delayed but maybe appropriate as today is the 70th anniversary of D-Day). Thank you to all of those who have served and those who are currently serving.  I have been trying to hunt down some pictures of my grandpa (my mom’s dad) while he was serving in the Army and stationed in Hawaii.  (I finally found them!)  He was stationed in Hawaii in 1945. I remember when I asked my grandma what grandpa did while in Hawaii, she said he spent a lot of time driving around looking for coconuts.

Friday, after running a few errands after work, and stopping at home to drop off cat food and feed Harley, I headed down to Milwaukee for the weekend.  Heather had been planning a surprise party for Meghan, with help from Meghan’s husband Eric.

After taking care of last minute stuff here in Green Bay, I made it down to Milwaukee just before 7.  It didn’t allow me much time to help Heather set up but she had most of the stuff taken care of, it was just setting everything up.  As we were getting stuff ready, some friends started to arrive and Heather got a text from Eric, saying that they were leaving the restaurant in the Third Ward.  So the group of us there were there waiting, munching on all of the goodies Heather made, and playing with the adorable baby Sylvie. 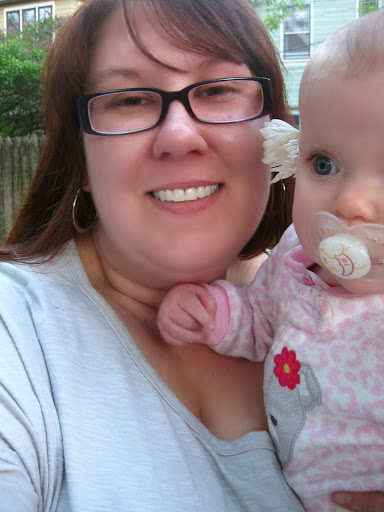 She was a little squirmy and kept grabbing at my camera.  She is very fascinated with everything around her. 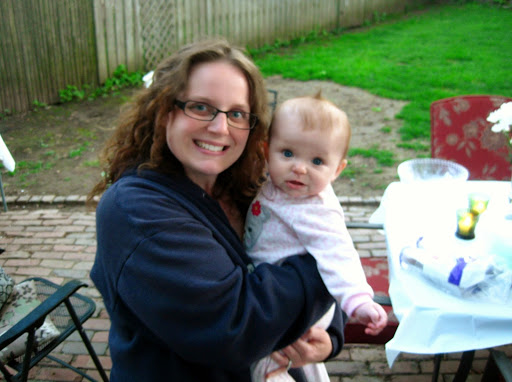 Tala, holding Sylvie, who is rocking a mo-hawk. This would totally make Meghan proud.  She had blue hair our freshman year and my mom kept referring to her has “Meghan with the blue hair” years after she no longer had blue hair! Punk-rock runs in this family! 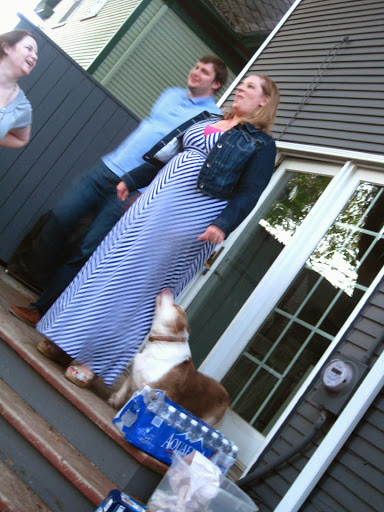 “SURPRISE!”  This wasn’t the most flattering picture but it was the only one I had of Meghan as she was walking out to us in the back yard.

We mingled around the fire, ate more snacks and had a few drinks. Our friend (Meghan’s ex from college) Brian showed up too. I had to take a picture of his awesome shirt. I incorrectly thought he was a Brony.  But upon closer inspection, the guy in the cowboy hat riding the pony looks an awful lot like Brian.  Can’t see the resemblance?  I can.  Secondly, the pony has a comedy mask.  I don’t know if a My Little Pony has a comedy mask. I could be wrong I haven’t played with a My Little Pony in about 25 years.  Brian informed us that this was a shirt his brother sold on his comedy tour. That makes it awesome. 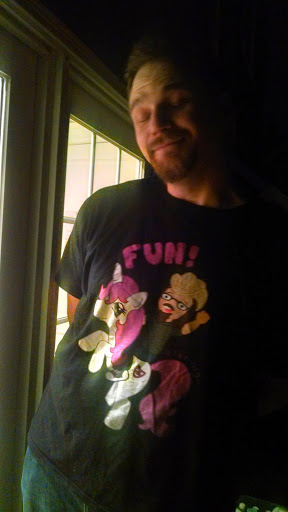 After Greg (Heather’s friend) and his boyfriend Brad left to go see X-Men, the rest of us sat around the fire and hung out and waited for the meteor shower, which never showed up.  I was really excited to see it, and disappointed that we didn’t get to see it.  The company around the bonfire was good so that made up for the lack of meteors.

Saturday morning, I got up about 9 and got ready to head down to South Milwaukee for a funeral.  My brother Greg and Betsy were in from Boston for Betsy’s grandfather’s funeral.  I ordered flowers the night before from 1-800-FLOWERS and had a hiccup.  I was told when I ordered them on Friday night at 8:30, that the flowers would have made it to the church for the viewing and the service.  Apparently 8:30 was too late in the evening, so I got a call from the customer service rep and I rescheduled them to be dropped off at Betsy’s parent’s house.  They tried, but because everyone was at the funeral, the florist didn’t drop them off until Sunday-Greg ended up texting me after we parted ways after brunch that the flowers were dropped off.

After the funeral, I stopped by where the lunch was going to be served and chatted with Greg and Betsy for a bit. Then I had to meet Meghan and Heather for pedis, so I headed up to Bayshore Mall.

Heather and I were pressed for time after doing a little shopping.  So we headed to Heather’s place so she could pick up clothes and scoot over to the hotel where Nadia, Heather’s friend was.  We got ready in the hotel room and headed over to the Great Lakes Distillery for a tour and some sampling. I wouldn’t call it a tour so much as standing in front of a still while someone spoke about the distillation process.

After the presentation was over we gathered around a whiskey barrel, and waited for the tasting to begin. Thankfully there were pretzels to munch on because we were starving.

Cheers! We started with a vodka., Then moved to a flavored vodka,, a gin, a rum, a whiskey and finally absinthe.  I don’t usually do alcohol straight up, and if I do, I usually have some sort of chaser other than water.  I wish I took pictures of the faces we all made! It as pretty funny.  I did learn that the proper way to smell the alcohol was do do so through your mouth and not through the nose.  Doing so you could experience the flavor better.

After the tasting, we stopped back at the hotel to wait for one of Nadia’s friends to join us for Nadia’s birthday dinner.  We enjoyed some wine, snacked on some leftover snacks from Friday night.  We ended up going to dinner at Botanas Mexican Restaurant (not to be confused with a bodega).
After dinner we headed to Walkers Point and stopped at a few bars there.

I ended up leaving after the second bar, I just wasn’t feeling well.  I don’t know if it was the combination of drinking and then eating a heavy meal and then drinking again, but I was back at Heather’s by 11.

After getting a good night’s sleep, I woke up feeling much better.  Heather and I met Greg and Betsy at Cafe Centraal, which is in the neighborhood of Bay View, which is about half way between downtown Milwaukee and South Milwaukee.  While waiting for Greg and Betsy, I ordered a Bloody Mary.  I’m not gonna lie, it was like a small slice of heaven.  It came with a chaser, which was light, slightly fruity, and pared well with the Bloody Mary. Are chasers a Wisconsin thing? Or are they something that other parts of the country do?

So I was telling my brother this really embarrassing story about myself.  I had him laughing so hard. I wish I had taken video of it.  His laughing was infectious!  It was one of those laughs that brought rears!

After brunch and we parted ways. (I’m proud of myself for not bawling like a baby). Heather and I went to the Art Museum. It was nice to go without any littles. We wondered around for a bit.  I finally got to see the Mrs. Larry L. Bradley Collection.  This sculpture looks like a stalagmite from far away, but it’s really buttons.

I don’t think any museum collection is complete unless there’s a Warhol.

Heather and I joked that there are some pieces of art that are hard not to touch, even for adults.  These metal sculptures were two that I had a hard time not to touch.  They were just BEGGING to have my hands run over them.  Alas, I resisted the urge. 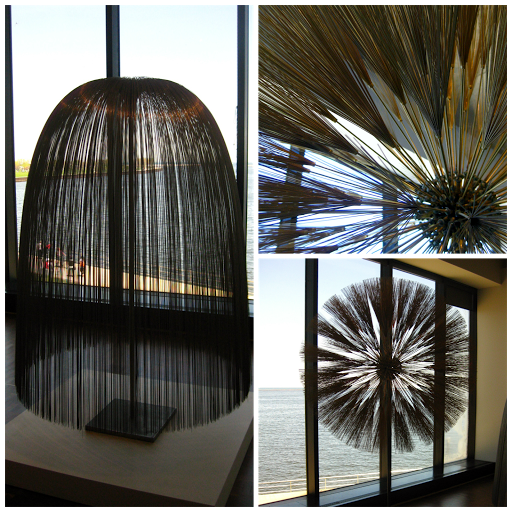 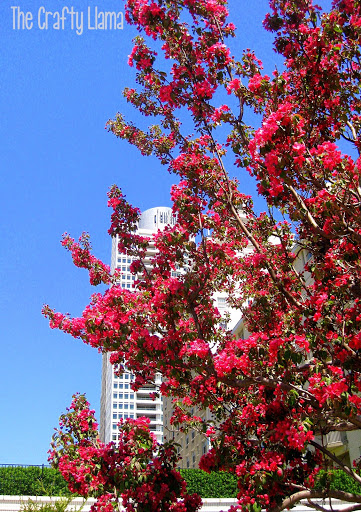 At about 6 pm I headed back to Green Bay.  Monday, I went to the Memorial Day Parade, with Jenny and Darsey and the kids.
We had Storm Troopers and Ahman Green. I see him around town in his truck.  It’s like a mini semi truck. This is a truck normal people have, right?

An no parade would be complete with out the Shriner’s.

I went over and had dinner with my dad.  We grilled out.  I found out that I like some brats…specifically Klement’s cheddar-wurst.  They’re not too brat-y.  All in all it was a good weekend, and an excellent way to officially kick off the summer.
How did you all celebrate Memorial Day?