Two Saturdays ago, I had planned a girls night out with my friend Kira.  We had a friend from high school whose band from Madison was playing in Green Bay Saturday night and we decided to check it out.

After getting my hair done, I was LONG over due for my color to get freshened up, I ran some errands and picked up some stuff for mojitos.  I already had the mint growing in my herb garden, so I thought it would be a good drink for a hot and muggy summer evening.  The perfect way to start our girls night out.

While I’ve had a few mojitos before, I’ve never made one. In the past two weeks, I’ve tried my hand at three different types of mojitos: raspberry, peach and blackberry.

The main ingredients are all the same, amounts vary depending on the size of drink: 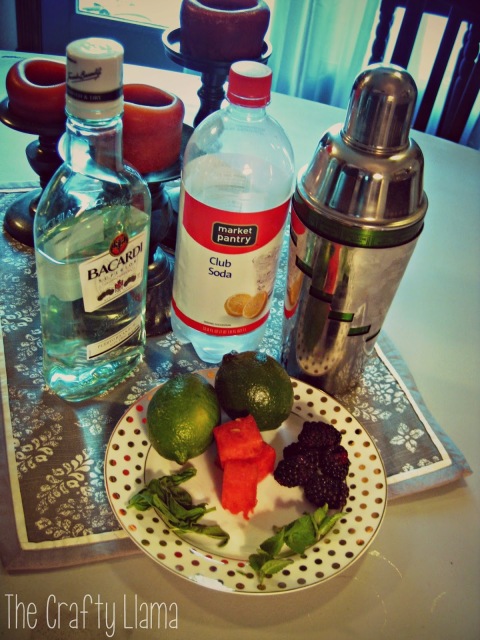 So first up was the Raspberry Mojito.

I started out by making the simple syrup by boiling water and sugar, I also added some Chambord because I didn’t have enough time to steep the raspberries.  When the sugar was all dissolved, I removed from the heat to cool.

I muddled about 4 small-ish mint leaves, three raspberries, and some basil from my garden.  I used the handle of a spoon to do the muddling.

I added few ice cubes, squeezed half a lime into the shaker and added 1 part simple syrup, 1 to 1 1/2 shot of Bacardi and filled the rest with club soda. I gave it a good shake and poured it into a glass.  I topped with a lime wheel for the finishing touch.  I think I went a little overkill on the basil. 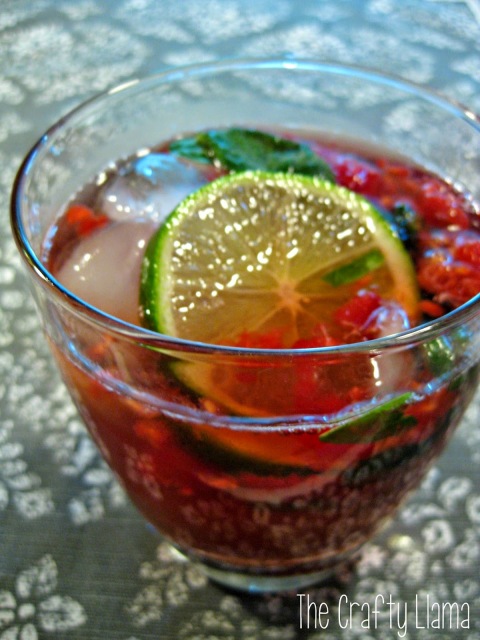 Even with the extra basil, it was good.  By the time Kira came over, I had one waiting for her.  We had a drink and then went to catch the band.  The show started at 6:30 and we arrived at the bar, Big and Rich, around 7.  It was an early show, owing to a city ordinance preventing loud noise outside after 10 pm.  The band was excellent.  And I’m not just saying that.  They played a great mix of music from different decades and some of their own music.  I’m looking forward to the next time they come up this way.

Kira and I ran into another person we knew from high school, and chatted with him a bit.  But the real reason we were there was to see Mark.  We chatted with Mark for a bit during a break and after the show.  It’s always nice to catch up (in person not on Facebook) with friends from the past.  There was good beer, good company and good music.  In all, I had a great night!

Now back to my next Mojito.  The Peach Mojito.  Again, I started by muddling up mint leaves.  Instead of the simple syrup, I pureed 3/4 of a peach and sugar to taste. 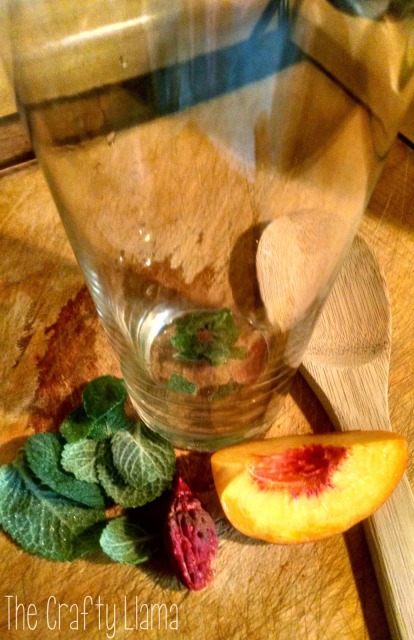 I followed the same process when mixing everything together: squeezed 1/2 lemon, 1 to 2 parts pureed peaches, 1 to 1 1/2 shot of Bacardi and filled the rest with club soda. 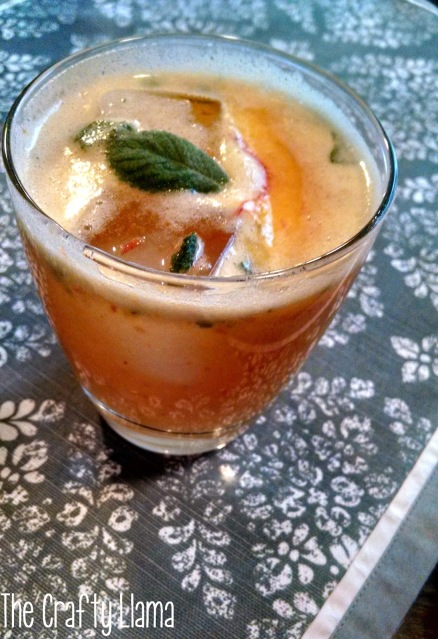 Last, but not least, was the Blackberry Mojito.  This was the same as the Raspberry Mojito, with blackberries, and no basil.  Next time I make this, I will be adding some basil.

I think I found my new summer drink.  In all I had to say the raspberry was my favorite followed by the blackberry and lastly the peach.  This would be an easy drink to make in bulk for a summer get together. Next time, I want to try ginger ale instead of club soda.

Tell me what you think.  Do you have any suggestions, or recommendations?  Post in the comments!