I’m excited to announce that The Crafty Llama now has a Facebook page! It’s new and you can check out the page here.

Where did the summer go?  I can’t believe it’s the middle of August already! My FWK (friends with kids) are all getting ready to send the kids off to school in a few weeks.

Last Thursday, I did get to enjoy what’s been a Green Bay tradition for the last 16 years.   I met a friend from work Chris, and his girlfriend, Emily at Taste on Broadway.  Taste on Broadway is a small version of Taste of Chicago (where I saw the Go-Go’s back in 2001). 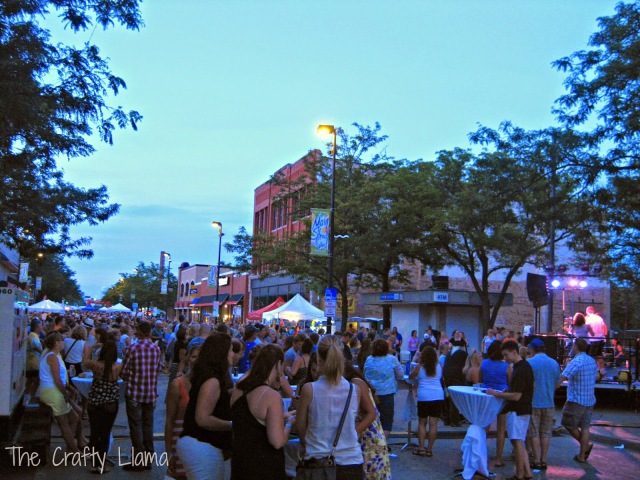 After purchasing my tokens, and meeting up with Chris and Emily, we started on our food journey.  Our first stop was at the Hinterland tent. We waited in line for about 10 minutes for Lamb Kefta Kabab, but the line was so long that we decided to move on and come back to it (I’m kicking myself now because we got there just after they had sold out).

Chris, Emily and I perused the stands while noshing on some tasty eats.  We eventually made our way to the opposite end of the street where The Cougars were playing.  They are a band fronted by 3 female leads and know how to rock!

After listening to The Cougars for a few songs, we made our way back along the opposite side of the street. Hoping to make it back to the lamb kabobs.  But we got sidetracked by a former coworker and her husband and chatted until after the kabobs were gone.

I apologize for the poor picture quality.  I was too excited to be trying the food!

1. Cake Batter Fudge from Beernsten’s Candy.  I didn’t get much of the cake batter flavor, but I like fudge anyway.  I thought it would have tasted more like cake batter ice cream.

2. Caprese Salad from Black and Tan Grille.  I was a disappointed in this.  I was expecting more because I’ve heard great things about their restaurant. I got a piece tomato that wasn’t ripe, it had that “stored in the fridge” taste.  I would have liked to see more basil and tomatoes.

3. Tiramisu from CasSandra’s Ristorante.  This was delicious.  It was a great pick me up, with just enough coffee flavor.

4. Peanut Butter & Bacon Beef Slider.  I’ve never had peanut butter on a burger before.  It was interesting.  There was sauteed onions, which I scrapped off.  I don’t like the texture of onions (cooked or raw), or flavor of raw ones.  The burger itself though was good.  The peanut butter added a little something extra.

5. Fillet Mignon Crustini from Chefusion. This was the highlight of my night.  It was topped with a horseradish aioli, and a pesto sauce underneath and shredded parmesan.  The steak was cooked perfectly medium rare and melted in my mouth.

6.  Chili from Stadium view. I did not try this, Emily and Chris did.  The sign read “it’s beefy” and that was no lie.  From the looks of it, it was all meat and beans.  Emily said it was really greasy and couldn’t finish the bowl, and even Chris tried it, but he couldn’t finish it.

7.  Sauteed Mussels from Chefusion.  This was another one of Chris and Emily’s samples.  I even tried the mussel.  First off, I don’t eat a whole lot of shell fish or fish (crab and shrimp are my go-to’s).  In the spirit of “trying new things” this year, I tried a mussel.  It wasn’t as fishy as I thought it would be.  I was also expecting it to be slimy.  Shows you how much I know about them!  It had a mild flavor and was fairly firm.  It was pretty good. I could see myself eating them in the future.

8. California rolls from Little Tokyo.  It’s been a while since I had sushi.  They were good.  I didn’t see any wasabi, until after I finished them. The other option was spicy tuna and I’m not ready to eat raw fish,

For spending $30 (somehow I ended up with a 4th sheet of tokens), it was a good way to spend a summer’s evening.  I was able to try some food that I haven’t tried, or haven’t had in a while.  I’m looking forward to making a stop at some of these places!

What kind of food excursions does your city have?  I’d like to hear about it in the comments!