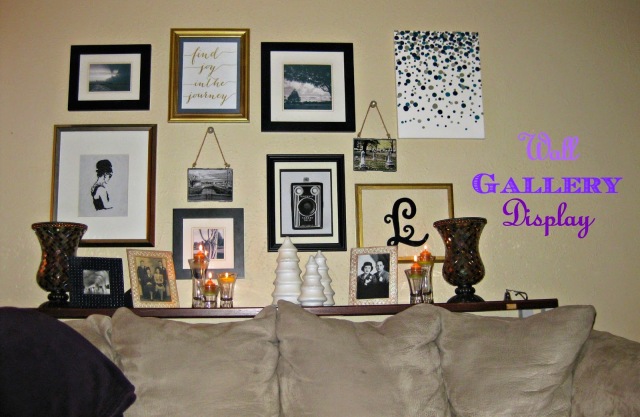 I like change, to mix things up, to rearrange rooms. So a few weeks ago, I decided that it was time to change my wall in my living room. I felt it was a little blah and wanted something more eclectic in my living room.

I didn’t want to get rid of my pictures, but I wanted to mix my pictures, with prints and art that I made. So I searched for some free prints and some different types of art I could do. I found a really cute Holly Golightly cross-stitch pattern.  You can find the pattern here. I got my needle and thread and worked on the pattern.  I hadn’t cross stitched in a long time, probably since I was in middle school.  I can’t recall ever finishing one either. I picked up this frame from TJMaxx this past week for $14.99.  I wanted this to be a statement piece so I picked a large frame that was matted to 8X10.  The frame, was simple and it seemed to fit the mid century, clean lines aesthetic. It wasn’t quite gold or silver/zinc but it mix of the two colors.

I had reused my black frames and my favorite pictures in them, and picked up one new black frame and the canvas from Michael’s Thanksgiving night. I normally don’t go shopping for Black Friday, but this year Kira’s birthday fell on Thanksgiving and I had met her out for some celebratory birthday drinks and stopped on my way home.

A few months ago I had picked up two Reese Horizontal frames from World Market.  I had intended them to go the wall with my pictures heading upstairs but no place seemed to fit.  I also picked up two frames from the De Pere Thrift store and spray painted them gold.  I found a wooden letter L and two knobs to use to hang the Reese frames in my searches.

There are so many cool resources for free printables. I found Free Vintage Posters, which is a cool site that has vintage images that you can print for free.

Also in my searches I found two prints I liked online that were available for free to print.  The first one was a quote that I liked. I found it here. The frame I had chosen for this picture had a blue-gray mat and I reused it.  I liked the contrast in color between the gold frame, gold wording and the blue-gray background

And the second one I liked was a picture of a Brownie camera, which I printed from here.

I also chose of my own pictures to add.  The first was taken on a walk at Voyager Park on the De Pere Riverwalk that was completed in 2013.  This picture I took was taken looking south into the lock with the Locktender house on the right.

The second picture I picked was taken on one of my cemetery walks. With this picture, I messed around with some color, exposure options. I love how weathered these headstones are

Instead of printing the prints myself, I ordered the images above and two pictures I had taken myself from Walgreens for less than $8. After I found the frames/prints I liked, picked my favorite pictures I wanted to keep and painted my blank canvas (this was my inspiration). I laid out my pictures in a few different layouts.  This was the layout I decide on

The next step was to put a mock up on my wall to see what it would look like. I took paper and made my templates and taped them to the wall.

Finally, I hung up the frames.  I only used one nail for the large frame and for the knobs. The rest, I used Command Hanging strips.  I like the way it’s centered on my console table and my hurricanes almost bookend the pictures. It also gives me the flexibility to add more pictures as I get them, or easily swap them out

With the frames I took down, I moved them to the wall going upstairs, and filled in gaps. I still have a gap that I would like to fill in, I think I found the perfect thing I’m going to put there. I’ll post that when I’m done.  I had to change the pictures that were in the vertical frame, so added two  pictures of daisies I took. I had taken those pictures this past spring at Luna Cafe with Jenny’s camera when she and I met there for coffee. I had taken about 7 pictures and I loved the way they turned out.  I’m thinking about enlarging some and putting them in my bedroom. 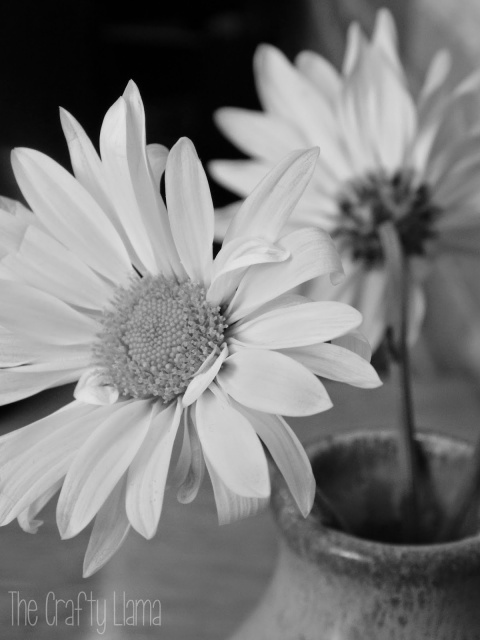 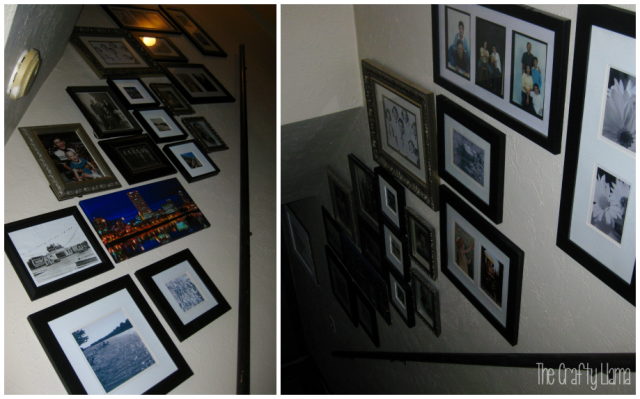 Those are my Gallery Wall Displays. I like having a mix of family pictures, pictures, I took and various art that means something to me, like the canvas prints of Milwaukee and Marquette Greg gave to me for Christmas a few years ago.
~Lonie