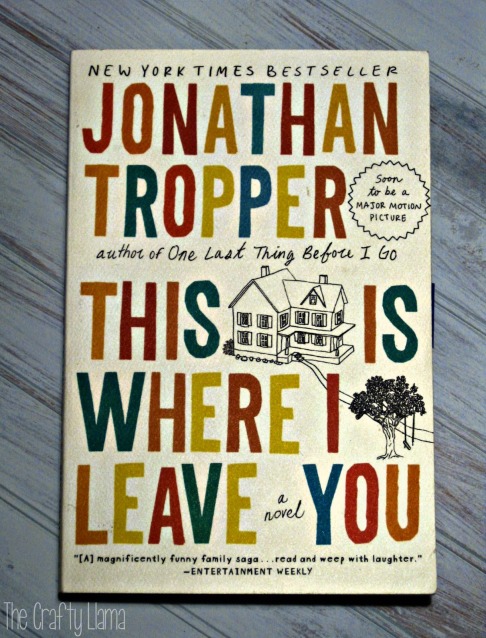 Hey there! Last summer my friend Jolene started a book club and invited me to join with some of her friends, and we’ve been at it for about six months or so. And there’s five of us who have been getting together once a month to discuss the book and enjoy each other’s company. Sometimes, we do more of the enjoying of the company than discussing the book, but it’s always an enjoyable time. This year I’m going to post here the books that we are reading, that way if any you, my lovely readers, want to read along please do! If you want to discuss the book please feel free to post your questions and comments in the comments section and I can take them along.

So the book we read for January was “This is Where I Leave You”. I’m happy to say that I did not watch the movie first! (sometimes I cheat like that). I enjoyed the book. Having gone through the death of my mother five years ago, I found the book to be relatable. I was also glad that as Catholics, we don’t sit Shiva. As a somewhat introverted person, two days of greeting people (many of whom I have never met or haven’t seen in years) and hugging and crying and shaking hands was very overwhelming for me. I couldn’t imagine doing that for seven days.

The Foxman family comes home to bury their father and husband (Mort). In addition to grieving the loss of (Mort) the Foxmans are all dealing with various aspects of their lives falling apart, which I think is something that almost everyone has experienced and can relate to, whether it’s infidelity, divorce, infertility and a sibling who won’t grow up. Stress brings out the worst in everyone and this is no exception for the Foxmans.

During the seven days, Judd, confronts his siblings, his mother, his past (in various forms) and his soon to be ex-wife. I liked Judd. I really felt sorry for him walking in on his wife getting down with his boss. Later when I found out that he and his wife lost a baby, I felt even more sorry for him, I honestly didn’t feel anything for her until later in the book. She was portrayed by Judd as a cold, heartless bitch. And I took that at face value. It wasn’t until later that we learned that maybe Judd had more to do with his failing marriage than we were originally lead to believe. While I still didn’t like Jen very much by the end of the book, I could understand that she was looking for someone to pick her up during her loss. I think Tropper did an excellent job showing how flawed Judd was. The conversation between Judd and Jen at the coffee was their most adult conversation, and I think it served as a wake up call for Judd. That made me wonder question how much of our “truth” is how we perceive things that happened to us and our actions towards others. Judd clearly thought that he was giving his wife space after the loss of their baby and she clearly thought he was being distant and kept pushing for a second baby. If only these two people could have had an open conversation, what could have happened? It made me wonder if they could have worked through their issues.

I think Hillary loves her children but while she loved them, I don’t think she could separate “Hillary Child Psychologist” from “Hillary Foxman-mother”. She knows no boundaries and thinks it’s totally appropriate to discuss anything and everything about her children and herself. I think I grew up with fairly open minded parents, while talking about some subject (like sex) in the abstract was completely fine, I wouldn’t be caught dead talking to either of my parents about any specifics. Fingers would go in my ears and I would yell “La La La.” It’s kind of like knowing how sausage and laws are made: There are somethings you just don’t want to see. I think if Hillary was able to have open conversations with her children (and them having no fear of it being put in one of her books) her kids may be more open to her and she wouldn’t have to fake Mort’s Shiva request, they would be more willing to reach out to her and include her in their lives.

I think the Foxmans are likeable as a family and likeable as individuals, Each person has a quality that is relatable. Paul, as the oldest, feels pressure to make their father’s business a legacy. Wendy is striving to be a good mother and wife to a husband who seems to have more important work to do. Judd is trying to grapple with a failed marriage, and a new child and how he will fit in that roll, without someone else coming in and being the “father” to the baby girl. Phillip, I think, is trying to get out from the shadows caused by siblings. I think he wants grow up but no one has given him reason to.

Overall, I thought the book was well written, there was just enough of sadness, bitterness, fighting to be relatable, and just enough laughs, to keep the book from getting too heavy. Ultimately I think the book is about recognizing your flaws, insecurities and coming to terms with past grievances and saying “We’ve addressed our issues, now it’s time for you to wallow in the past and hang on to your bitterness or you can take what happened and work to making life better”.

Have you read “This is Where I Leave You”? What did you think?