In honor of St. Patrick’s Day on Tuesday, I made Irish Beef Stew. This is something I never made, and I’ve never had. I wanted to try something a little festive, and more authentic. Since I work from home I don’t make the treats I did when I worked in the office. That was my excuse for baking! I know traditional Irish Stew calls for lamb and not beef, but beef was what I went with. I think next time I’ll try lamb though.

I love being able to buy the smallest amount of liquor as possible, when I’m cooking with liquor I don’t drink often, if ever.. I left with the bottle of wine (I used Frozen Tundra Red, from a local winery Parallel 44, which is maybe a 20 minute outside Green Bay), a 12 ounce bottle of Guinness and a wee little bottle of Jameson, since I don’t drink Guinness, or Jameson, I figured buying anything larger would be a waste.

I cut my sirloin in approximately 2 inch pieces, trimming off only the really large pieces of fat. Pat dry and sprinkle with salt. In my cast iron dutch oven, I heated the oil. and then placed 1/3 of the meat in the the oil and cooked until nice and brown. You don’t want to crowd the meat, because you won’t get a nice browning.

Once the meat was nice and brown on one side, using a tongs, I flipped the meat over and browned on the other sides.

While the meat was cooking, I pealed the carrots. When all of the meat was done, I added the garlic to the meat and cooked for a minute or so. When it started smelling nice and garlicky, I added the beef stock, water, Guinness, red wine, tomato paste, sugar, thyme, Worcestershire sauce, and bay leaves. I brought to a simmer, then lowered the heat to low and let it  cook for an hour.

While the meat was cooking, I took the butter and heated it in another pan, and added onions and carrots and sauteed them. It took about 15 minutes until the onions were nice and golden. I took them off the heat and set aside. 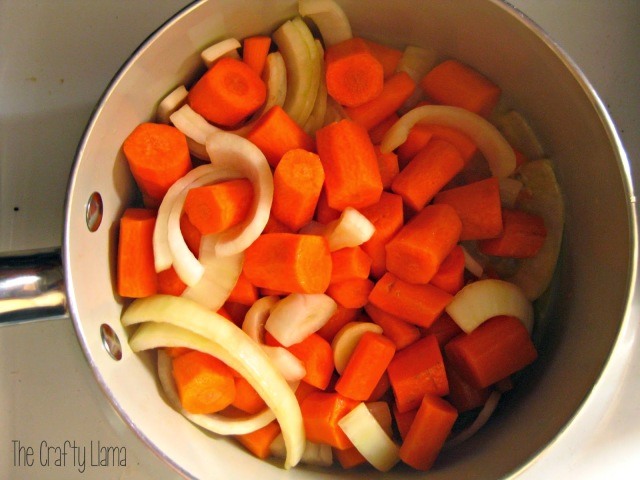 Just before the hour was up, I pealed and cut the potatoes.Then I added the carrots, onions and potatoes to the meat, the recipe I had said to let simmer for 40 minutes. The potatoes weren’t quite cooked after the 40 minutes were up, so I let it all simmer for an hour.

When the stew was ready, I removed the bay leaves, scooped out the extra fat from the top and transferred it in a serving bowl. I then topped mine with parsley before eating. 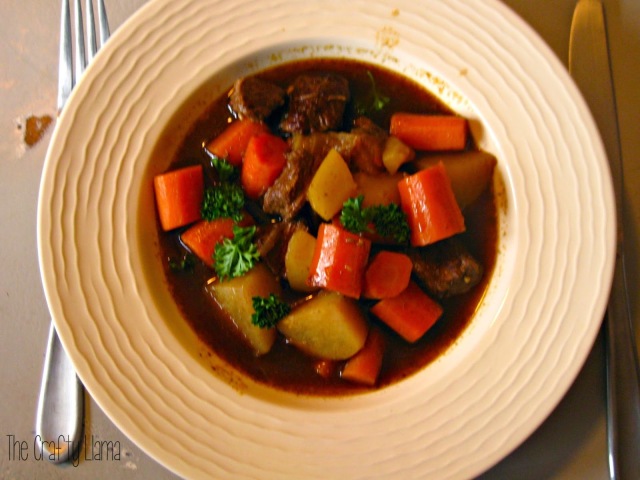 I really enjoyed this meal. I like most stews. I did think because I was using low sodium broth and not as much salt as the original recipe called for, it could have used a little extra flavor. Next time I make it, I will try lamb and maybe monkey around finding some additional flavors.

Have you made Irish Stew before? Do you have any suggestions to add flavor, without adding salt? I’d love to hear your thoughts!