For the past few months, three of my co-bridesmaids and I, have been planning a bridal shower for Betsy, my brother’s fiance. With her family from South Milwaukee and most of our family lives in Green Bay it was decided that two showers would be best. Now that the shower is done, I can finally take a breather and (hopefully) my schedule will slow down a bit.

The theme of Betsy and Greg’s wedding is rustic, so we decided to use the same theme for the shower.  My one requirement was to have it at my place. After comparing different venues, it seemed like having it at my place was the most cost effective option.

I made the invitations, using the colors in the wedding, coral, navy and gray. I had printed the main part of the invitations on linen paper, using fonts I had downloaded (I’m a bit of a font hoarder). Mandy, Shelby, Amy and I put them together one night.

The weathered privacy fence that surrounds my yard was a perfect backdrop for the rustic shower. Through Mandy and Shelby we were able to use tables, chairs and tents that their mom and dad lent for the day, which was another way that we were able to save some money. 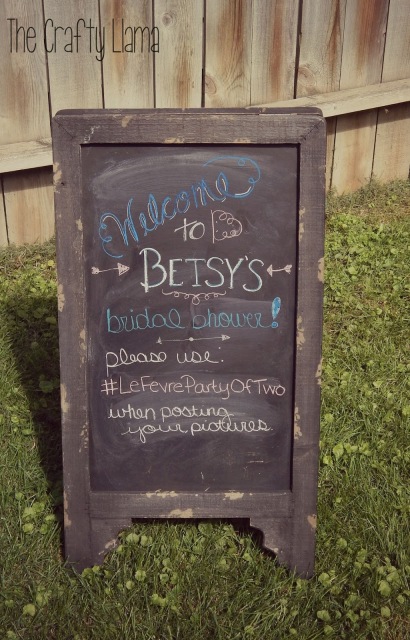 Shelby brought this chalkboard that she had, and I did the writing on this and other chalkboards I bought. I love the hashtag that Betsy had at the other shower, it’s such a nice idea to be able to tie photos from the showers, bachelorette party and wedding together, 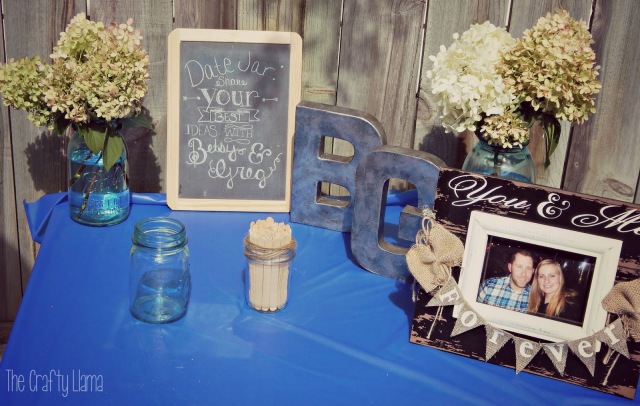 Amy, the other bridesmaid who lives in Green Bay, found the Days Until Happily Ever After and the You and Me Forever picture frame.  I supplied all of the blue mason jars, and the hydrangeas. Which, I cut from my dad’s back yard, I love how some of them are white, and some of them had some pinks and were a bit darker. Shelby picked up a box of baby’s breath and I had put those in various vases. Some I had made to look like mercury glass and others I left as is. I think mix of the flowers, jars and vases really added to the rustic feeling.
We did a Date Night Jar. To complete the table, I borrowed the B and G I had made Greg and Betsy for a going away gift when they moved to Boston.

The food spread was crazy. Shelby and Amy really out did themselves. We had three kinds of sandwiches, various fruit, cheese, crackers, meat, dips, and meatballs. We also had cucumber water, a punch, and a drink called Pink Panty Pull Down. It was very sweet, but delicious, I had to drink it in moderation. 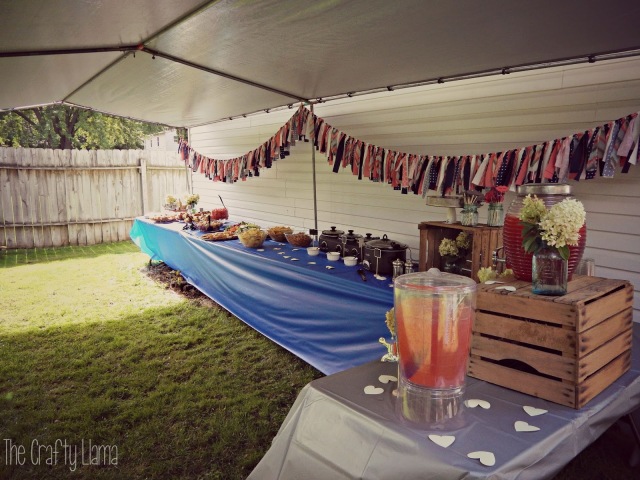 The rag banner was made by Shelby. It is so pretty, and I want one of my own. I think she did a fantastic job on this. Amy made lips and mustaches for the guess who game that we played.

Betsy, asked us to include recipe cards with the invitations. So to hold the recipes, I used a vintage bird cage that I picked up. As a favor, I made body a lemon and lavender body scrub. I’ll have that post up soon! 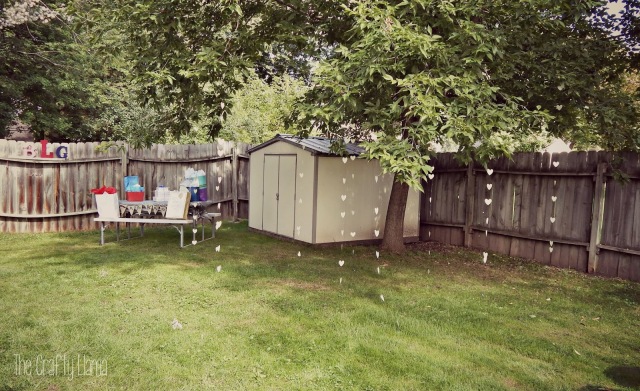 Amy had cut out a bunch of hearts,with her fancy new cricut. Then Mandy hung them on fishing wire. and attached weights to them. They were hung from the tree in the back yard, near where Betsy would open the gifts. I think it added a nice back drop.

Shelby was in charge of the cake was made by a local bakery called Life is Sweet. The cake was red velvet, with a buttercream frosting and was so delicious. The cake stand was something I had made using an old wooden candle stick and a old cake pan. 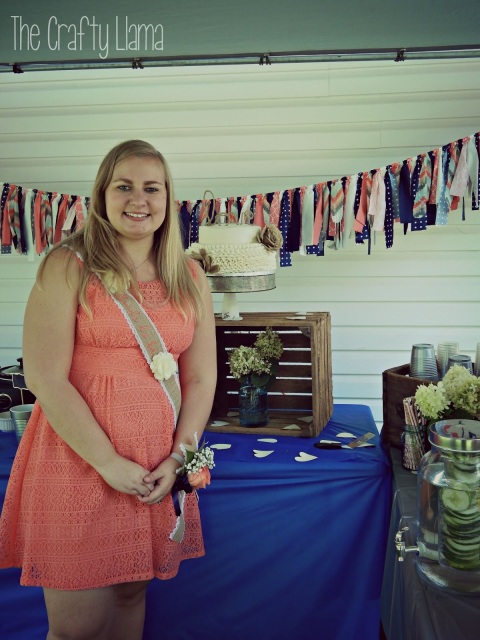 Here is Betsy, the Bride to Be with the cake, and she’s wearing a sash I made for her.
All of the awesome rustic crates were either Mandy’s or Shelby’s. We used them to store the cups and for general decoration.  Mandy picked up the day of and those were on display as well. My neighbor’s son had a blast playing with them after! 🙂
I’m glad that I put on the shower. I loved how everything turned out, And I’m glad I got to work with Amy, Shelby and Mandy! I’m looking forward to hanging out with them at the bachelorette party and at the wedding!

Welcome to the family Betsy! In just over a month, you’re stuck with us! 🙂