The second session of our photography class, focused on taking a good composition, and learning how to take interesting photographs.

We learned that the are four elements of photography; frame, flatness, focus and time.

We were sent out into the neighborhood with our cameras in hand and told to take pictures with what we learned previously, and look for leading lines and frame lines. We were given about 45 minutes to complete our task. It was a gorgeous day out! Mid 60’s in mid March!

I headed out to the back of the building and started snapping a way.  I really liked the spray painted pillars, along with the leading lines of the sidewalk, and the windows and the roof of the building.

I wondered around for a bit walking over by East High School. On my way back I walked across a bridge and saw a padlock locked to it.  It must have been left over from the end of school one year.  I liked the leading line of the fence post. I adjusted my aperture to get the padlock in focus and the rest blurry. Between the two, I adjusted my camera height, and took one in color in the other in black and white. The black and white photo was one I showed to Kasey when I got back to the class and the only thing she would have suggested would have been to move my camera so the padlock was in the top third of the photograph and follow the rule of thirds.

I like how both of these turned out. I do like the one of the left because I think the color adds better contrast. But I really like black and white photography. Who knows maybe this lonesome padlock will be an inspiration. 🙂

I took this photo on my way back to the class. I squatted on the sidewalk of a busy corner to get this low angle. I like how the crosswalk serves as a leading line towards the building, and offers stability with the symmetry in the crosswalk lines and the pattern of the “cobblestones” in the crosswalk. At first I didn’t like how the traffic light and light post cut the was right in the middle of the building, but it grew on me. The vertical lines of the post and the building offer reflection of frame lines.

I liked this light. It doesn’t quite fit R of 3. But the mortar lines offer a nice pattern and some leading lines and reflection of frame lines. I also liked the contrast of colors between the brick and mortar, the light and the sky. I did feel this was slightly under exposed though.

My last photo before going back in was of the window of the front of the building. The lines in the window serves both as reflection of frame lines and leading lines. The leading lines move the viewer from the window through to the lights (which I loved) and awning. though the back of the photo with the smoke stack at the back. I liked the reflection of the building and sky in the window. I tried to crop the cars out as much as possible but to do so would get too close to the lights. I also like the contract in the red brick and the Cream City brick.

After we were done taking our photographs, we showed them to Kasey and the rest of the class to look at and critique. I’m not good at listening to critiques of stuff like this, I get very nervous, and shy and modest! Who would have guessed, right?

For the rest of the class, we looked at two or three photographs from about five different photographers. Unfortunately, I really only remember the photos by Dorothea Lange and Elina Brotherus. Maybe it’s because their photos stuck with me more, who knows. The point of the exercise was to look at photos using the knowledge we learned.

One of the first photos we looked at were from the Great Depression. They were of a Migrant mother and her children on the side of the road. Both of the photos below were of the same family, but to me, bases on their different perspective, they invoke different feelings. The photo on the left feels much more personal to me.

The other photographer I remember was Elina Brotherus. Her self portraits in various tubs and sinks, with the shutter release in the picture was very moving to me. I felt that there was this pain she was experiencing and having recently ended things with the boy, I could relate. 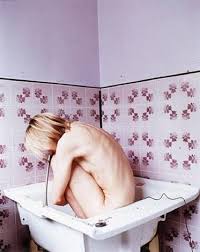 There were others, black and white photos of various food, which I though was very sensual. Some very high tech photos that reminded me of stills from some high budget move.

Lastly, there was this black and white photo of a castle. When I first saw it, it reminded me of something out of Dracula or Frankenstein. Turns out this photo was taken by Diane Arbus at Disneyland. This is such a spooky photo. I love it!

At the end of the class, we were given an assignment to take three to five pictures of one subject  and photograph it in different ways. If we were able to manipulate the subject, the better!